We use cookies to maintain your preferences, so you can log in and keep the site in your prefered language. Learn More.
Categories

We start this article with a working Qt Creator IDE environment. Please have a look at the ebook about how to install Qt creator when you do not have the IDE installed yet. The goal of the application is to create a working template of a console application by running into all problems you might get. I will explain why these problems exist and show you some different ways to solve them. I love console applications and need them for systems without GUI. Qt is a wonderfull framework and not limited to GUI applications.

We start by creating a new project. 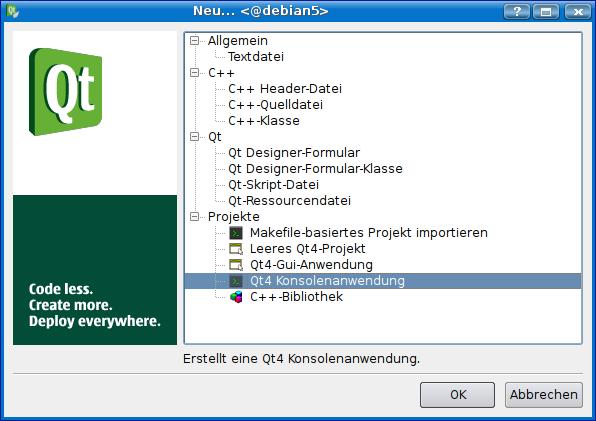 We give the project a name and a directory. 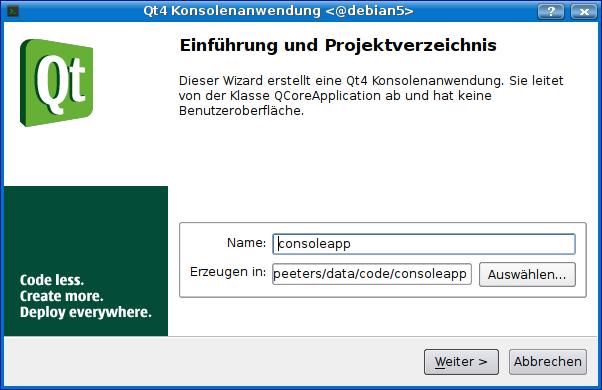 We select the modules we need for the application. If we do now add modules now, we can add them to the project later. 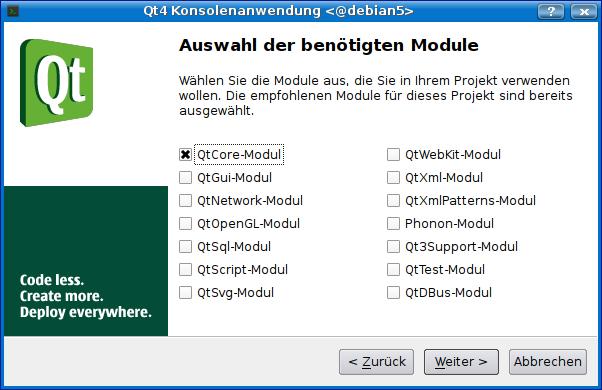 Qt creater created two files for us. The first one is consoleapp.pro. The contents is the following:

This is a Qt project file and we do not have to change it now. The second one is the main.cpp file. As you might expect, this program is not doing anything. I even have bad news for you, if you run it, it does not end!

1.2 Ending the application and show some output

The application does not end because we never told it to end. It is running a messageloop and exactly doing what it should. To make it end, we need to send it a signal. Now we want to run into all the problems we might run into. I changed the application and gave it a timer which will end the application after 5 seconds. Using the timer makes it possible to show you a few pitfalls. To see some output, I created a QTextStream which will be written to stdout. To have some more output, I also added an iostream and a QDebug message. This program will compile just normal, the funny thing about it, is the output and the timing. Why? (In a normal application you might use one of the output possibilities and stick to it.)

The output of this application is not what you expect. You will have to run the application to know exactly what I mean. The first two lines of output will be shown immediately. The one you expect to be the first will be the last and it will be shown after 5 seconds. The last funny thing is the qDebug output. It has an extra newline after it! Did you expect this output?

QTextStream is buffered, as long as the buffer is not flushed, it will not show anything on the screen. To flush the buffer, we have two possibilities.

Using endl will flush the buffer inplicitly. In this case, it is the prefered way. You could have used qout.flush() to explicitly flush to buffer to. The qDebug has a kind of build in endl and does not need to have an extra one. I took it out! Now this is what the code looks like:

The output you expected to get in the first place.

You will see the output at once, than the application waits till the 5 seconds are over and quits. So far so good. To write some nice console application we need to do something. Now we will add some sourcecode which can be filled to do something usefull. When the task is done, we will end the application. For demonstration purposes, we still leave the 5 seconds trigger at the end. We will need it! The first thing to do is to add a new class. This can be done by right clicking on the project and selecting add. 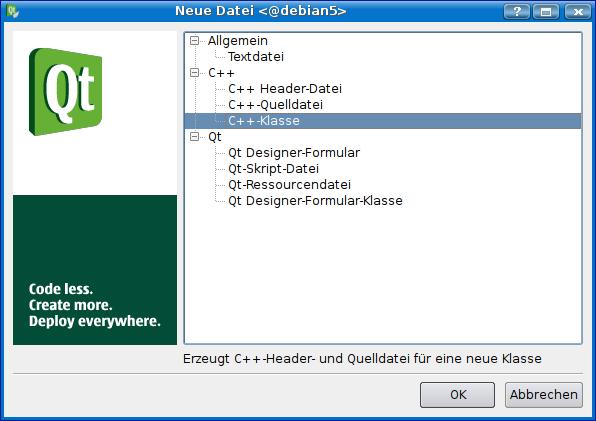 We give the class a name. We need to inherit from QObject and add the new class to the project! 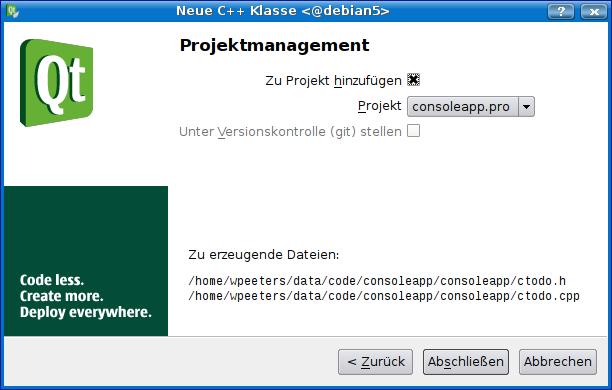 Now I changed the generated class a bit so it can be used. The ctodo.h file has been changed to:

I also changed the ctodo.cpp file so it can show something on the screen.

If you get error messages concerning "vtables not found" you need to run qmake. This can be done by selecting it from the menu or by involing a complete build from the menu. If you run the programm you will see that the program will not quit with your signal. Instead it will wait and end after 5 seconds. This again is not what I would expect. If you would not have this 5 seconds signal, it will run forever! The program will output is shown below.

1.4 More pitfalls you can run into

In the program I also introduced an own created signal. The code for the implementation will be generated by the framework! If you generate it you will get an errormessage stating a multiple definition of CTodo::allDone(int). I gave it an int parameter for demonstration purposes. The parameter is not used in the program. Another pitfall you might run into is the Q_OBJECT keyword in the headerfile. This is needed for signals and slots. That's why you will have to run qmake to solve the vtables error messages. I used the flush function in the constructor to demonstrate the usage of it. Try to leave it out and run the program again! The most interested problem is the signal not being sent to the app in the main function. That's why the program does not stop and need the 5 seconds timer to get stopped.

Wim Peeters is electronics engineer with an additional master in IT and over 30 years of experience, including time spent in support, development, consulting, training and database administration. Wim has worked with SQL Server since version 6.5. He has developed in C/C++, Java and C# on Windows and Linux. He writes knowledge base articles to solve IT problems and publishes them on the Lubby Knowledge Platform.